An analysis of the political economy behind the win, and why we can’t just copy-and-paste this strategy onto other fights.

There’s a dangerous fossil fuel pipeline project that has flown under the radar of national attention. The Mountain Valley Pipeline stretches through West Virginia and Virginia, and is trying to bust into North Carolina. Last week, it suffered a major blow thanks to relentless organizing from a diverse coalition of working-class residents uniting to defend their land, air, and water from the destructive Mountain Valley Pipeline LLC.

From the frontline of the fight, we received this email:

“Hey all GREAT NEWS … the Air board 6-1 I believe denied the permit!!!!!!!!! No Compressor Station... bad news my phone is shattered but I ran to the car to get on my computer to let you all know the great news!!!!”

The sender of the email was Crystal Cavalier-Keck, a citizen of the Occaneechi Band of the Saponi Nation and the Executive Director of 7 Directions of Service, one of our grantees at Preston-Werner Ventures. Cavalier-Keck had good reason to be excited in her email, sent just minutes after the Virginia Air Pollution Control Board voted to deny a crucial permit to the Mountain Valley Pipeline project. Crystal, with her organization, is a long-time leader in a fight to defeat the fracked-gas Mountain Valley Pipeline. She has led direct actions targeting local, state and federal agencies involved in permitting the pipeline. She has also organized community testimony and engaged countless community members in diving into the dogged advocacy required to organize around water permits, environmental justice requirements, and every little bureaucratic detail that the pipeline project requires in order to reach completion.

The Lambert Compressor Station that was denied a permit would have enabled the extension of the pipeline project into South Carolina, and onto the land of marginalized Black and Indigenous communities. Without this compressor station permit, the entire Mountain Valley Pipeline project is looking increasingly unviable – especially since organizers have been challenging the pipeline on every front they could find. Thanks to the work of 7 Directions of Service – along with others, including Appalachian Voices, Pittsylvania County NAACP, and POWHR – the pipeline project lacks a number of federal and state authorizations, faces millions of dollars in fines for water quality violations, and is far behind schedule. Killing the compressor station is a powerful blow to a project already weakened by persistent grassroots organizing. 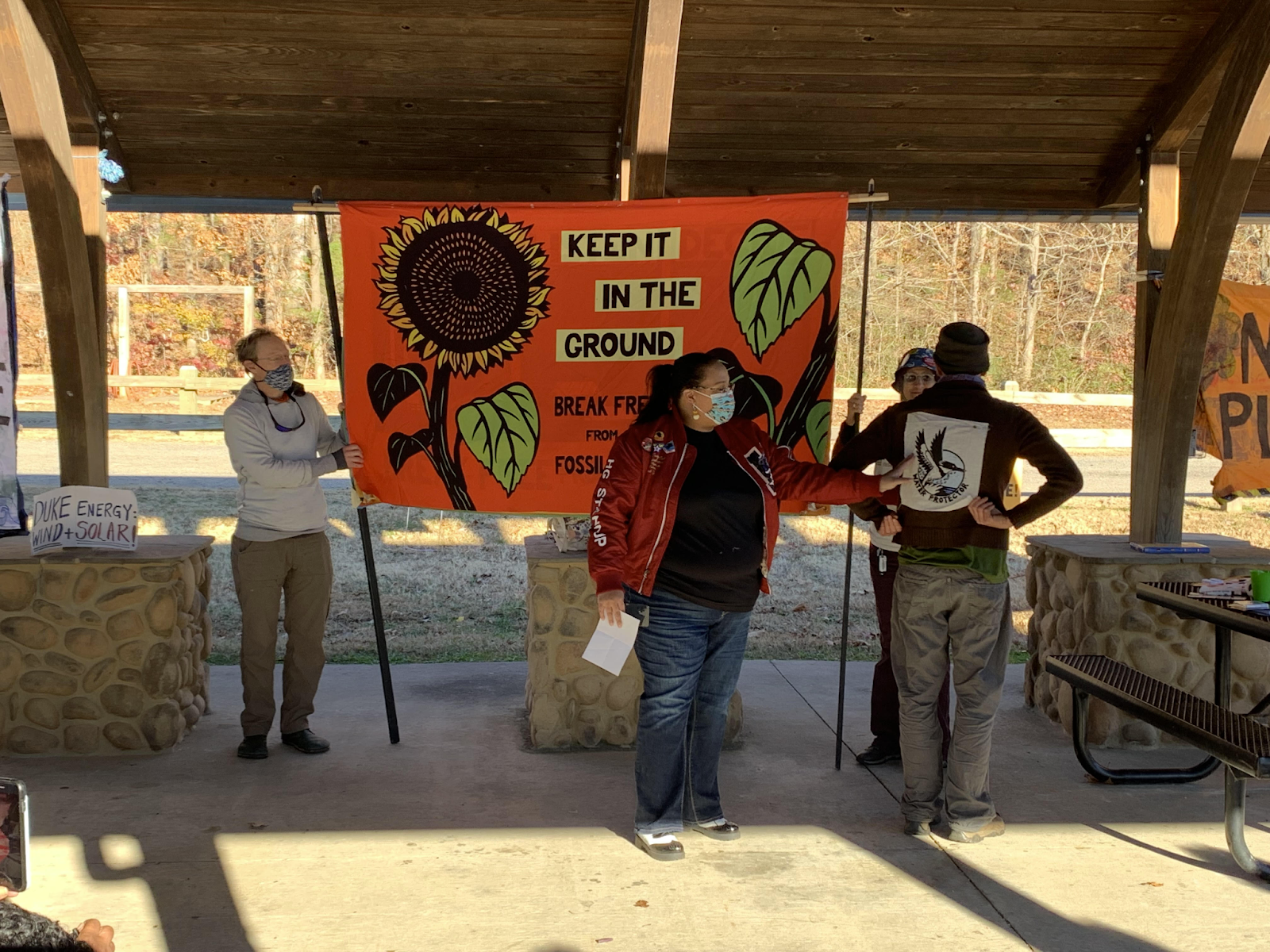 The compressor station itself posed serious environmental justice concerns to the surrounding community. Communities would have suffered increased concentrations of carbon monoxide, formaldehyde, and particulate matter, which have been demonstrated to contribute to respiratory problems and cancer.

In her testimony, Cavalier-Keck spoke out about the real harm that would be caused by the compressor station. “My oldest [child] has had asthma since she was five. I am not sure if you have ever seen your child struggle to breathe; it is not fun. I once had walking pneumonia, which caused me not to breathe correctly, and it is a scary feeling not being able to expand your lungs to grab the air thoroughly.”

In addition to the fatal impacts the fossil fuel industry is willing to impose on local communities, if the Mountain Valley Pipeline were to be completed, it would result in annual greenhouse gas emissions equivalent to 26 coal plants or 19 million cars. Furthermore, the pipeline would catalyze additional fracking and natural gas combustion, as it would eventually link up with the Transco and enable gas transportation all the way from Texas to New Jersey.

Fighting the continued legacy of exploitation

After mobilizing her community to provide testimony, door-knocking to collect signatures, and lobbying the Virginia Air Pollution Board, Cavalier-Keck presented her case during the public hearing, reminding all present that this fight is nothing new, and that Indigenous people have been fighting government-sanctioned destruction of Indigenous resources for centuries.

Pointing to a number of government agencies, she argued in her testimony to the Air Pollution Board, “FERC, Army Corps, and Virginia DEQ have been playing political roulette with our lives...These permits are a 20th Century Doctrine of Discovery...We must be done dying for the benefit of industries. Decisions that impact our life and health demand our input.”

It is important to recognize that 7 Directions of Service is an Indigenous-led, working-class, multiracial organization. A recent report found that Indigenous-led resistance to fossil fuel projects has stopped or delayed greenhouse gas pollution equivalent to at least 25% of annual US and Canadian emissions. Indigenous communities have been repeatedly exploited, displaced, and sacrificed for the benefit of government-backed corporate profit. This ongoing legacy of oppression has pushed Indigenous people into positions of severe exploitation and disadvantage. From this position, Indigenous communities across the continent have been able to recognize destructive projects quickly and accurately for what they are, and to know that defeating these projects requires a determined, relentless fight. On the flip side, fossil fuel companies often look to workers seeking jobs for support of pipeline projects. By building alliances with local workers – many of whom are farmers – 7 Directions of Services helped to undercut the pro-pipeline narrative that workers uniformly support the pipeline project.

How can the climate movement replicate this type of victory?

The decision to deny the permit represented a sharp departure from the norm. “I don’t think any of us were prepared to hope for a decision like this,”said Taylor Lilley, attorney for Chesapeake Bay Foundation, a group allied with 7 Directions of Service.

The Virginia State Air Pollution Control Board based their decision to deny the permit on 1) their view that the compressor station would have “potential negative environmental consequences,” 2) their assessment that the permit did not meet “fair treatment” requirements under the Virginia Environmental Justice Act of 2020, and 3) the unsuitability of the site.

An uncritical analysis of the situation could lead a funder to simply try to replicate the Board’s stated reasons for the permit denial: For example, impacted residents in other geographies could present cases that make it clear that other pipeline projects also create “potential negative environmental consequences.”

However, at Preston-Werner Ventures, we seek systemic, material explanations for outcomes. We know that pipeline projects throughout the North American continent are constructed despite their violations of laws and their negative environmental impacts. Simply trying to replicate the stated reasoning for a permit denial would not necessarily result in the same outcome in a different jurisdiction or context. To learn from this success, we examine both the context of the victory and the actions taken by the successful coalition:

Contextual factors that likely contributed to the victory over the pipeline company:

In addition to the contextual drivers that contributed to victory, the community coalition also made strategic choices that led to a no-vote on the permit.

No single strategy or contextual driver is unique to the Mountain Valley Pipeline fight. Yet some combination of factors collided to create a win for the climate. We can’t directly copy-and-paste this victory onto other battles against the fossil fuel industry that are happening across the country and around the world, but by analyzing the conditions surrounding the issue and the decisions organizers made throughout the campaign, the climate movement can learn from its victories.

After the Air Pollution Board decision, a Mountain Valley Pipeline spokesperson complained, “The board’s decision is not supported by the factual evidence and the rigorous examination presented by MVP.” As any pipeline protestor can attest, it’s often our side who feels that government boards aren’t listening to facts. This highlights the point: it is a political question of which facts are listened to, whose narrative is favored, and whose analysis is considered more rigorous and comprehensive. The key here is that the climate movement can shape underlying political conditions in order to create an environment where decision-makers feel that siding with environmental justice communities is the clear and rigorous choice.

Despite the victory over the compressor station, Mountain Valley Pipeline LLC is still trying to push the project forward, seeking alternative routes and pursuing permits. Building on the momentum of the no-vote on the compressor station, organizers and litigators stand at the ready to counter every move the pipeline company makes.

Thanks to organizers with 7 Directions of Service and their many allies, conditions are changing. With each victory over a fossil fuel company, the potential for environmental justice becomes increasingly possible.